Posted on June 1, 2022 in Case Studies, News
The Metro line running from RFK Stadium down to Benning Road in NE Washington D.C. needed retrofitting. The aging column piers that supported the trains and roadway above were getting closer to the end of their service life. The Washington Metropolitan Area Transit Authority (WMATA) hired contractor W.M. Schlosser to undertake the massive job of providing additional support to the metro train line columns, which would provide for a much... Read More Posted on May 2, 2022 in Case Studies, News
Nuclear power plants are required to routinely undergo rigorous monitoring, inspecting, and maintenance procedures to help ensure their safe operation. In the Spring of 2020, Scaffolding Solutions was hired to provide safe access to the outside of the curved structure of a nuclear plant located in rural South Carolina. “Scaffolding Solutions did a great job on the nuclear shutdown. They designed and installed a custom suspended access bracket to meet... Read More Posted on April 18, 2022 in Case Studies, Scaffolding
The National Museum of Women in the Arts (NMWA) in Washington D.C. champions the work of women artists through exhibits, online content, programs, and collections. NMWA has been located in the same building since it first opened in 1983. As time went by, the 112-year-old iconic building was starting to show signs of its age—exterior cornices and designs were crumbling, and the original windows were cracked. Because of this, the... Read More

How Scaffolding Solutions Helped an Aviation Hanger with Custom Scaffolding

Posted on January 11, 2022 in Case Studies
The Steven F. Udvar-Hazy Center in Chantilly, Virginia, houses some of the Smithsonian’s largest aircraft and spacecraft, including a Concorde jet and the Space Shuttle Discovery. The Center is a popular destination, attracting nearly eight million visitors and aviation enthusiasts every year. The on-site Boeing Aviation Hangar, which shelters many of the museum’s pieces, is the length of three football fields and reaches a height of 10 stories. The hangar’s... Read More Restoration Of a Historical Courthouse With System Scaffolding

Posted on January 11, 2022 in Case Studies
When completed in 1928, the Buncombe County Courthouse became North Carolina’s tallest local government building at 17 stories high. Over time, the landmark structure deteriorated and eventually required extensive restoration. To get it done, remediation crews would have to work 195 feet above ground to mend the historic building’s exterior brickwork. This meant that safe and reliable scaffolding would be critical to the project’s success. The county needed experts familiar... Read More Posted on November 19, 2021 in Case Studies
The Virginia General Assembly Building in downtown Richmond was long overdue for a significant remodel. The structure was scheduled for partial demolition and rebuilding by Gilbane Building Company.  The improved 15-story building would blend old and new, preserving the original 1912 limestone façade while modernizing the rooms and public spaces.  Considering that the new structure had no internal elevator, Gilbane needed scaffolding for a building remodel that would allow them... Read More Posted on May 24, 2021 in Case Studies
The 14-story brick building that housed Bon Secours hospital in Greenville, S.C. was starting to show signs of its age. Over the decades, construction technology had improved by leaps and bounds, and it was now time to undergo a modern renovation.  Bon Secours hired Western Waterproofing as the contractor for a portion of the job. However, because the hospital still needed to provide care to patients, having construction workers haul... Read More Posted on January 18, 2021 in Case Studies
Featured Scaffolding Projects Our previous scaffolding projects have ranged anywhere from restorations to architectural design. Scaffolding Solutions provides equipment rental and installation services that are safe, efficient and keep projects moving forward. Read more about our featured projects and previous scaffolding work. The National Shrine of the Immaculate Conception, Washington D.C. “It is not often that a Cardinal blesses workers, scaffolding and equipment with Holy Water, but that is what... Read More 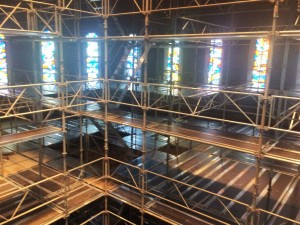 Posted on August 12, 2020 in Case Studies, News
Western Carolina University, located in Cullowhee, NC, decided to rework the facade on their aging basketball stadium. Before repair work could get underway, several challenges prevented construction crews from getting workers and materials up to height using traditional methods. The general contractor needed an innovative solution to allow the project to get underway safely and at a minimal cost. They reached out to the North Carolina office of Scaffolding Solutions,... Read More